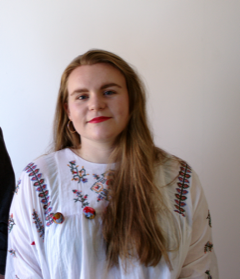 Grace started playing the drums aged 7 and pursued a music career from an early age in her hometown of Liverpool.

After completing a Music Technology A-Level, she went on to study BA Hons Popular Music at the Liverpool Institute For Performing Arts where she graduated with 1st Class Honours. She has recently completed her MA at the University of Liverpool with a focus on music business and industry. She hopes to continue her research onto a PHD in 2023.

She is the record label manager for Both Sides Records, a pioneering label that focuses on readdressing the gender imbalance that exists within the music industry. Working exclusively with female and marginalised genders based in the North, the label aims to empower musicians in the early stages of their careers.

She is part of the Liverpool Music Board gender equality sub-group which is working towards a manifesto for change in the Liverpool City Region.

Grace is also a freelance session musician and percussionist. She is part of the collective Girls That Mix which provide Ibiza style entertainment across the world for weddings, parties and corporate events. She has also been a session musician for multiple artists and her work has been featured on BBC Radio 1, BBC Radio 2, BBC Radio 6 and BBC Radio Merseyside.